it's been 10 days since i last showed you all any progress, and that progress has been minimal. i'm halfway through, having crocheted 1 band of 2 rows per color. i don't really feel any love for this blanket in person, but i really like it in pictures. go figure. 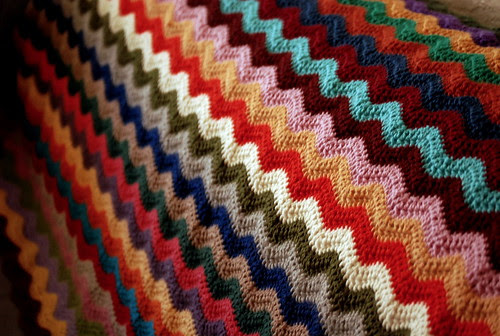 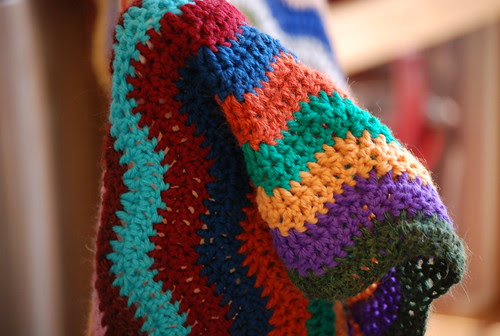 the blanket is 5 feet wide. based on my calculations i'd planned on being able to crochet 3 2-row bands per color, but i'm only going to be able to get 2. the yarn band lies. 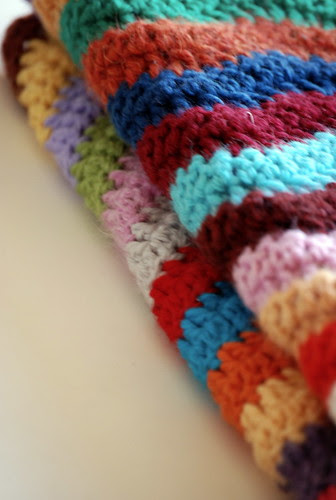 Day 2 Update and needing some feedback

I worked on my ripple last night and had a idea. This is for a baby boy; originally I was going to just do white, light blue and darkblue, repeating that pattern. But after I finished the dark blue I suddenly wondered if that would look boring and thought one single bright color thrown in would live'n it up a bit. So I ran out at lunch a found this bright green and rippled a bit while I ate. 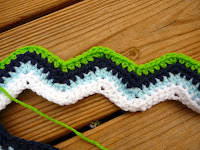 This is what I have so far. And this is the pattern I want to repeat; white, l.blue, d. blue, green, d. blue, l.blue and white again... 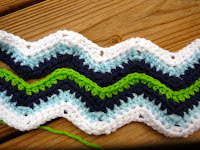 I bugged one of my co-workers for her opinion, she liked it. But I'd still like some more opinions. What do you think? Do you think it's working? Does the green "pop" in the middle of that dark blue?
Trish~ aquadshotyarn
Posted by Unknown at 8:15 PM 12 comments:

Email ThisBlogThis!Share to TwitterShare to FacebookShare to Pinterest
Labels: Trish

We interrupt your rippling for a moment of International crochet clarification. (many comments on this lately...)

Crochet is one of those places where "American" and "British" get themselves in a bind.

Here's where I get confused. What is a US slip stitch in UK? I have no clue. I imagine it must be the same thing. Or half double crochet, is it called half treble? And what about chaining, is it still chaining? I think it is. And is there a British single crochet? What on earth is it? Ooo, maybe it's hdc! Chime in you over-the-ponders, inquiring minds want to know! (and if you're in New Zealand or Australia, which system is common to you?)

Anyway, that's why it's good to know where your pattern is coming from. It can all get very wonky if you don't.
Posted by Dawn at 6:28 PM 7 comments:

All of the colors... ...are now a part of this thing. And again I've been having trouble with the internet, so once more I have pics that are a few days old. The beginning of day 18 (Monday)looked like this:

I finally got to add the first stripe of cream, the last of my nine colors. I swear that cream in Zara is the softest of its whole range. It's absolutely wonderful to work with. I've since added a couple more stripes, and I hope to be able to add a couple more today. A stomach bug has kept me from work for the better part of this week so far, so I've got the time, but I don't know if I have the energy.

On a side note, I'm wanting to finally get a stitch dictionary. Which is your favorite? Any suggestions?

Gooberheads: my blog
Posted by Devvy at 5:47 PM 4 comments:

I had FINALLY gotten back to my round ripple. Just cruising along. Loving the yarn. (Fantasy Naturale mercerized cotton.) Loving my hook. (Back to my cool Boye aluminum I after a winter of warm bamboo.) Loving the wavy ripple Michelle made for me. (Go see.)

Came to face the fact that I'll be needing another hank of each of the blues to do what I imagine. Not a big deal. It's like $5 a hank. Will have to wait until after vacation though. Before I zipped it back in to it's bag to wait it out, I spread it out to snap a few pics to share. 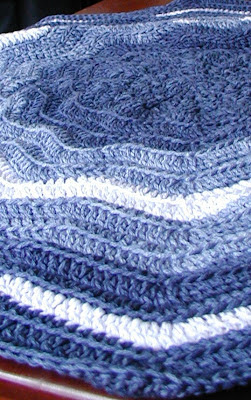 Or I tried to. 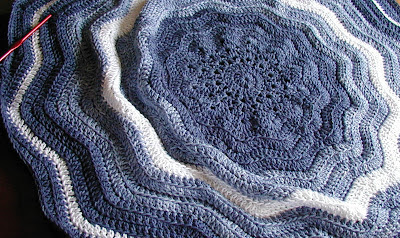 Can you believe it? My ripple rumpled. I haven't had this happen before, but I must not be increasing fast enough. I've been working increases every-other row because it seemed like it was increasing too fast, but now I seem to have the opposite problemo.

I don't believe I'm going to have to rip another ripple. I think I'm ripple-cursed. Some HRM I turned out to be!
Posted by Dawn at 4:58 PM 3 comments: 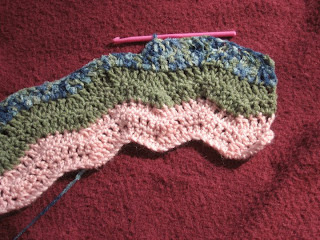 I had written and then I think it got deleted, I'm new to this writing on the blog. Anyway, I'm so excited to be part of this. Ever since my Mom gave me this ripple afghan in October (she bought it at a fair), I've been wanting to do something like it. I have been admiring it for a long time, it's beautiful. It just as great as any piece of art in a museum. When I saw the Ripple-Along, I knew it was time to start on my own 'masterpiece'.
I love starting and finishing projects, but this one is more of something to work on when I have time; I have a 9 month old daughter who I like spending time with :) And I have plenty of clothing items I want to make for summer. So this afghan will be done it's own time and we'll see together what it will become.
I'm using pattern "strata" from '200 Ripple Stitches'. Everyone's ripples look great and inspire me. Thanks Dawn!
Happy Spring.
Melinda in St.Louis
Posted by Melinda at 4:44 PM No comments: 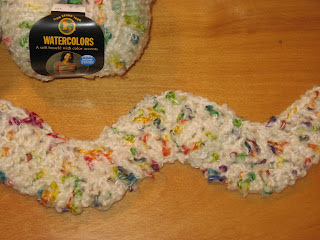 Sharp Chevron from Donna Kooler's Encyclopedia of Crochet in LB Watercolors Bright Clouds. I have another batch of Woolspun also to be rippled, but then No More Looopy Yarn! But this is working well with a Boye N hook which is about the same gauge as a Crystallite L!? and the plastic was difficult with this yarn.

I currently have 3 batches of yarn to ripple. This project is so perfect. Like another recent poster I need the blankets and have this stash I haven't 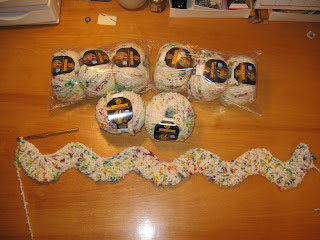 I can understand the keeping on topic argument, but it sure is fun to share some past pretty ripples. Here is one more from me, another feather-and-fan knit from chunky yarn. Too big and weird colors to really use, so I don't quite know what to do with it.! :-) 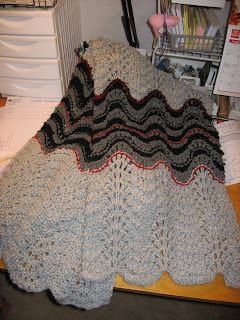 Oh, and this pattern is really easy for any new knitter (like me!!) just one pattern row and three regular rows (2 knit, one purl). Try it!
Posted by Cecilia at 12:26 PM 1 comment:

Just a Rippling Away

Hi Everyone,
My name is Necia and I'm ecstatic to be here. I was minding my own business last week, just a blog hopping as usual when I came across this beautiful ripple blanket. I was on Posies blog, and she had a link to this RAL.

needs. I started that very night. Here's a pic after Session 1.

This sure is addictive!

Thanks for having me. Everyone's ripples look awesome, and so unique in each individual way. I'll be back later to post up pics of Session III or you can always spy my blog Jane of All Trades
for updates. 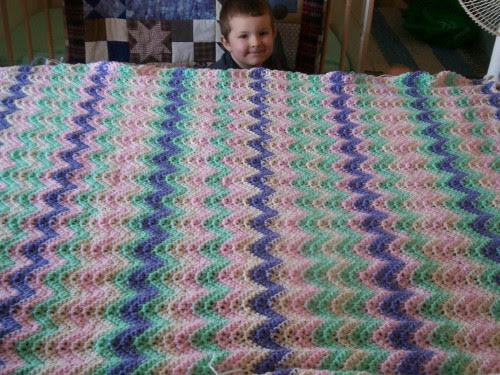 Well, slowly but surely, my afghan is getting there. Where? Somewhere. :)

I have a confession to make. This afghan was SUPPOSED to be made using the soft waves pattern we all know and love. Only, well, it's my first crochet project and all...and I didn't know what double crochet was...and I looked it up in an outdated book...and was given a definition that does NOT match the popular definition for double crochet...and started merrily crocheting along in what I later found out is actually, no kidding, SINGLE crochet.

So for anyone who has ever wondered what the soft waves pattern would look like in single crochet (with just a couple of adjustments I made to make it work -- and here was I thinking the PATTERN was wrong!), well, wonder no more. Behold; Single Soft Waves.

Next on my agenda after finishing this (because yes, I am a stubborn kind of girl and yes, I will finish what I started, DANG IT) is another soft waves afghan -- this time, in colours more to my liking, and following the original pattern, and much, much bigger.

But, to add a little perspective to this whole afghan ordeal, I have included in this photo a reminder of one of the best things of which I have ever participated in the making, and in which there is no flaw -- my perfect firstborn son, Jonathan! This boy always appreciates mama's handiwork, too, be it perfect or no. :o)

Email ThisBlogThis!Share to TwitterShare to FacebookShare to Pinterest
Labels: naughtydebbers

I tried to resist

I didn't want to join in. Not because I don't like the idea or the ripples but just because I had other things to crochet and I don't like not finishing what I start. I should have realised that I wouldn't be able to resist.

First I realised that we needed more blankets for the children. Then I noticed that I had more yarn in my stash than I thought so that was my excuse gone. I may even end up making two - one in wool/acrylic mix and one in cotton.

I've started with the wool/acrylic mix ripple. I'm trying to stick to masculine colours for my son because the cotton one will have a lot of pink.

This is Day One 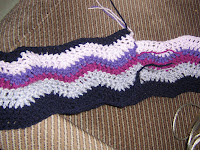 This is Day Two. 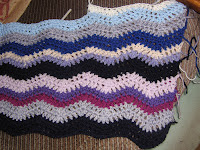