Ice cream with Ketchup on top!

Lovely title, isn't it? That's what my blanket looks like so far... neopolitan ice cream with a healthy scooping of ketchup for extra flavour.

I'm trying to take a personal growth approach to this blanket - taking risks and letting go of control. You know... trusting my crafty instincts in selection of yarn colours, and believing that all will settle in and be okay. The most important part - trusting in the process and enjoying it. It's all a little something I learned while studying Expressive Arts this past summer. 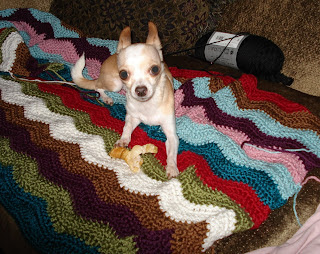 That's my dog Assata lounging on my ripple so far. Whenever she's on the couch with me, she has to find the most comfortable spot. In this case, it's flattering.

Let me think a minute. I've been working on this 12 days. I'm still rippling and "waiting." Luckily, it's my Spring Break - I'm a public school teacher - and except for working a few hours at my part-time gig and running overdue errands, I have nothing better to do. Also, I've even been able to get some embroidery and sewing done. Maybe I'll add knitting to the "done" list by the end of the week.

I just added black to the mix and still have gray to add. I will probably try to randomly insert those into my already randomly generated stripe pattern. I don't want to think about it too hard. Luckily, the more I work on this pattern (from Jan Eaton's book), the less thinking is required. 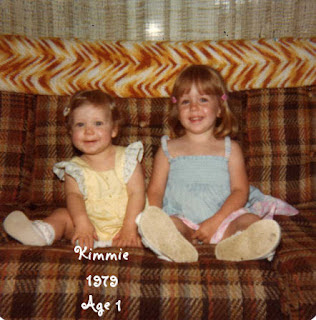 This is the inspiration for my learning how to ripple. I grew up with this 'ghan my mom made way before i was born. It was always hanging on the top of the couch. I always loved the style. (not the color) it was the 70's lol i knew one day i was going to learn how to make something like this. hmmm maybe i could find some funky yarn like that and give to my kids. Notice that its on the couch in 79 and 83. probably tons more if i really looked. i just saw these in my book and had to scan them. 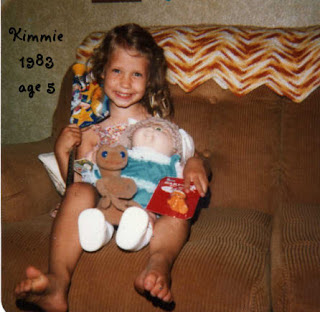 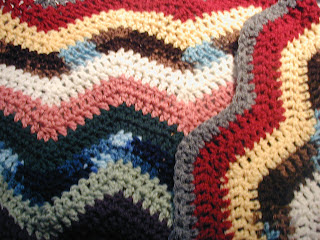 Size K hook. Red Heart Acrylic Yarn. Roughly 80" wide I think...
Here is my new and improved ripple after 3 days of working on it. It now hangs about 5 inches off either side of my king size bed instead of feet. I kept the first 4 rows the same as before, but i'm improvising from here on out. When I finish that gray stripe, it'll be about 14 inches long. Due to my inability to do any kind of simple math... I have no idea how long it'll take me to finish... but it won't take months *dance*

I'm already fantasizing about future ripple projects. I want to do something in a nicer yarn, probably something wool. Who knows.

Anyone else find themselves sitting infront of the computer crocheting, and then refreshing this blog every half hour or so to see if someone else has posted something new? *raises her hand* I do!

Have a loverly day ripplers!

Has anyone thought of the Grateful Dead? I often sing that song in my head as I ripple along--it really fits the mood!

Liane's gorgeous baby ripple reminded me that I too had made one for my little girl, when she was a baby six years ago. I unearthed it: 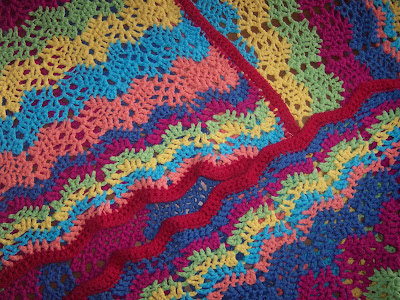 It saw a lot of action, and any number of washings and dryings, and held up surprisingly well. I used a single crochet for the border, which I think I'll do for this one. I'm progressing along on the new one: 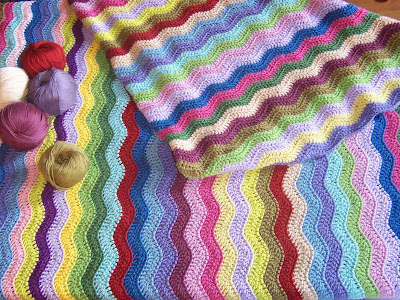 And if you like, you can check out my blog for another entirely different sort of ripple afghan I'm knitting, "Lizard Ridge" in Noro Kureyon.

Your ripples are all looking so great! I love this blog!
Posted by Leah at 9:05 AM 6 comments:

Email ThisBlogThis!Share to TwitterShare to FacebookShare to Pinterest
Labels: Leah 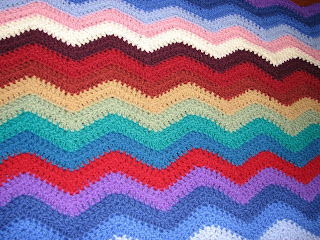 I'm also new and recently caught up in the ripple craze. Having seen the lovely creations that you talented people are turning out I decided to order some yarn (I used all my bits and pieces for projects for the school fete last year) and get started. I ordered a whole box of 100% merino yarn from a woolen mill in Tasmania and have been rippling steadily since it arrived (with just a brief pause to wind it into balls). It's about 2.4m wide (that's 8ft to those who work better in imperial measurements) and about 46cm long, which is 18 inches, or so my in-house converter [a.k.a. husband] tells me. I want it to fit my queen-sized bed when it's done and have figured out if I keep going at the same rate I should be done in about six weeks.

The pattern is one I learnt as a girl from an aunt but which I'd forgotten I knew until I saw all this. A bit of experimenting brought it all back and this is the result.

Not sure I've chosen the best colours but I think once it's all done it will work okay.
Posted by Daisy at 7:50 AM 2 comments:

Email ThisBlogThis!Share to TwitterShare to FacebookShare to Pinterest
Labels: ripple

Still have yet to start?! 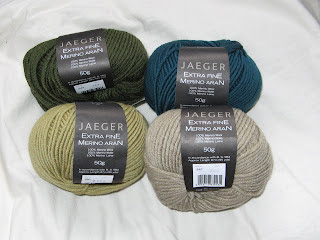 Have had too many projects to finish before I can start on the blanket but this is the yarn that I intend to use. All that remains is for me to learn how to crotchet. Bought this at the X'mas Liberty's sale where they were reduced to £2 a ball... which meant that I had to buy loads of it. Love the colours, earthy and natural. Oh what fun awaits, looking at everyone's posts on this blog just makes me itch to start!
Posted by Original Ting at 5:29 AM 2 comments:

Is anyone experiencing pain in their arms from crocheting? I've got pain in both my elbows (the crook of my elbow... the inside bit... the concave bit... you know), and sometimes in my wrists.

Email ThisBlogThis!Share to TwitterShare to FacebookShare to Pinterest
Labels: Chrissy 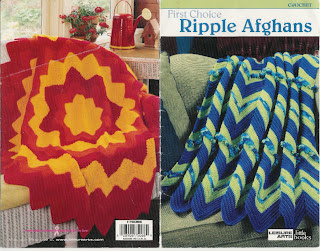 These pictures are from a little booklet I picked up at Walmart. I wish I would post the instructions because Dawn was looking for a center ripple pattern, This first photo is of the back and the front of the booklet (reading from the left). I did the one that is photographed on the left quite a while ago, I haven't been able to find the photos I took of it so I haven't been able to share it yet. But from the book you can see how it looks. Mine was done in Dark Green, then Light Green, then Light blue, repeating. It is a very large blanket when done. 8 center points, then doubles to 16 points, then doubles again to 32 points. I made it as a baby blanket for a friends baby, I started it when I found out she was pregnant, and finished it when he was a year old. I was basically teaching myself how to crochet at the time and had to frog this thing out several times, sometimes from being over half way! NOT a beginners pattern! It did end up teaching me a lot about how to read an actual pattern. The one on the left is called Aztec Sun, the one on the right Vibrance. 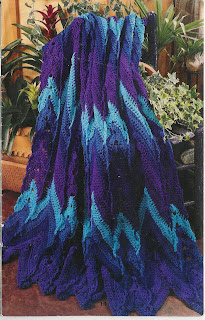 This next one is called Royal Bargello, I think it would be fun to do in blues and maybe 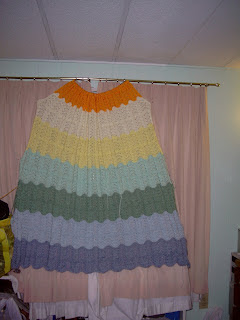 This one on the left is another ripple I have sort of forgotten about. Mostly because to continue I need a lighter shade of orange in the Simply Soft brand, since that is what the rest of the blanket is made of. I found the color I need on the Caron site, it is called Light Country Peach, alas I have no way of purchasing things online, at least not yet. I have another project that would need 2 skeins of it as well, which is probably why it hasn't been started. It is photographed pinned up on the curtains in my living room, since that is the only place I could think of to take any kind of photo of it. I would use the bed as many have done but um the bed is on a bed frame my husband conceived of and built. Sitting on the bed his hair brushes the ceiling, and the top of the mattress hits about mid-chest on me while standing. So pictures on it not happening, at least if I am taking them. Each strip of color is one skein. Done on smaller needles than the previously posted knitted ripple, also with just one strand of yarn instead of two. 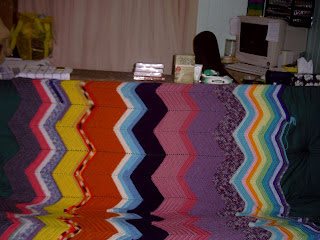 Ok, really long post today! Sorry!
One more thing, I need some input fellow ripplers, I am considering, and have been considering for some time frogging this afghan, and restarting it with JUST leftover yarn. At the moment it currently has yarn that I didn't have a plan for at the time, such as the yellow, orange, dark blue, the lighter pink and the multi purple. The gray at the end and the purple in the middle were frogged from something else, and are in small bits so they would be reworked into the new work if I were to restart it. I have a quandary, this has been in the works for years, but I am really not liking how it is turning out and want to restart it.
I shall post updates on my previously posted projects tomarrow.
Tina
Posted by Books, hooks, needles, and my weightloss journey at 12:06 AM 3 comments: